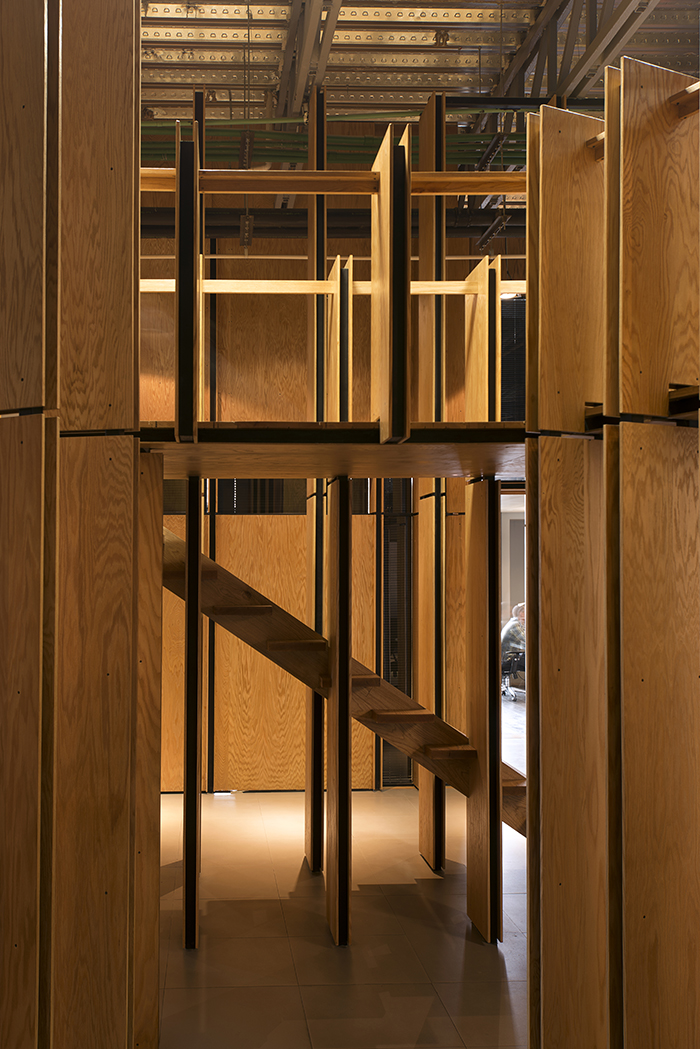 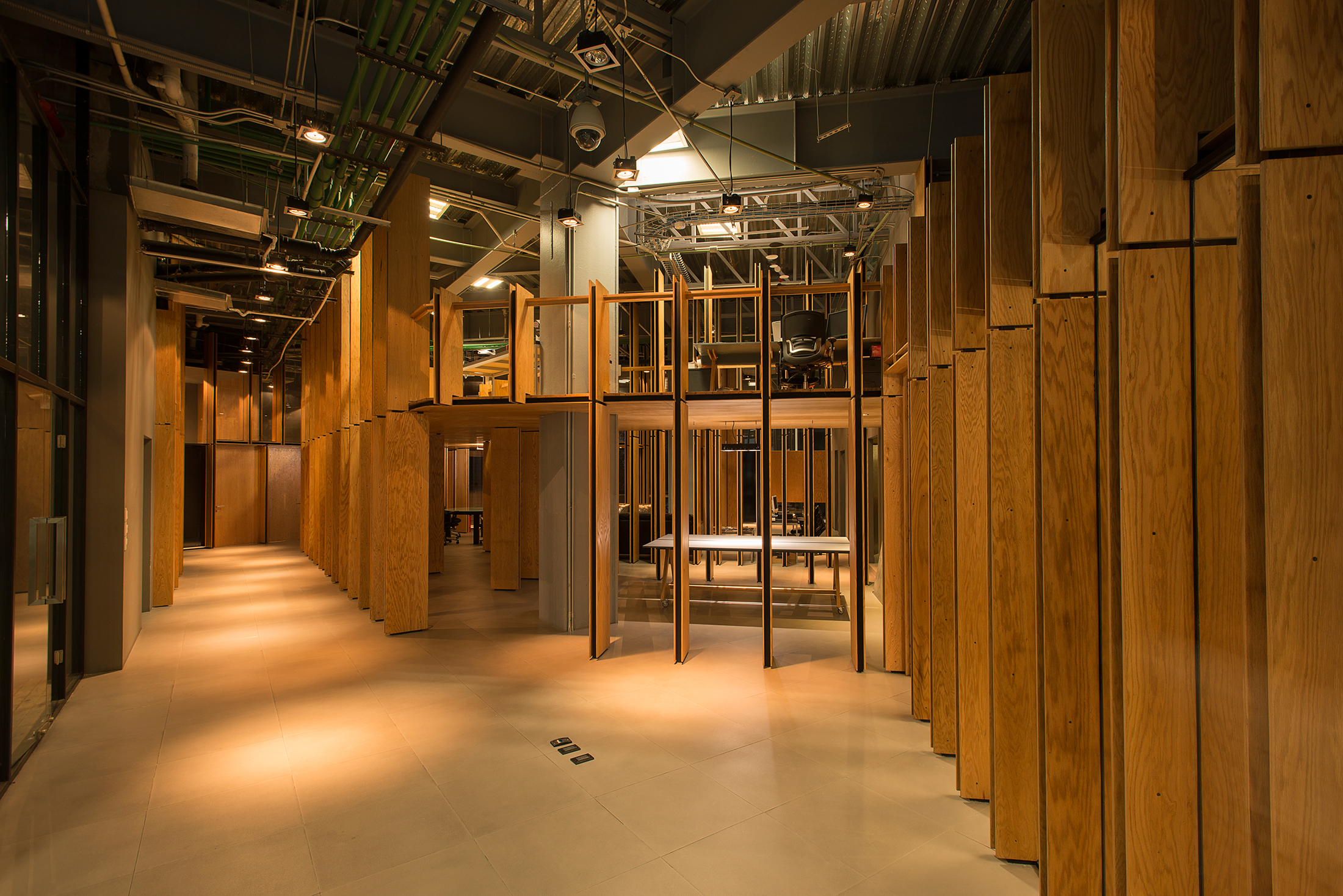 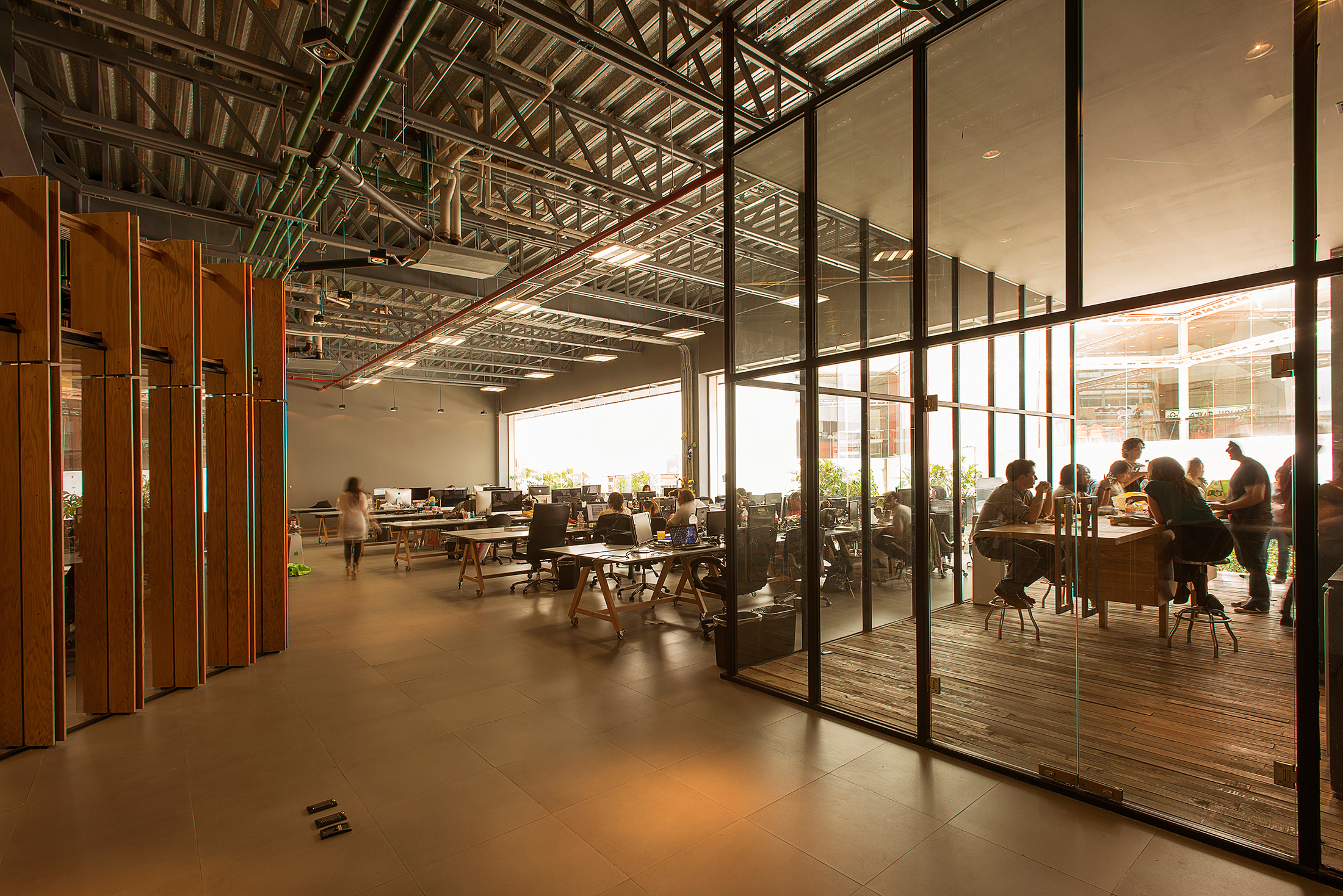 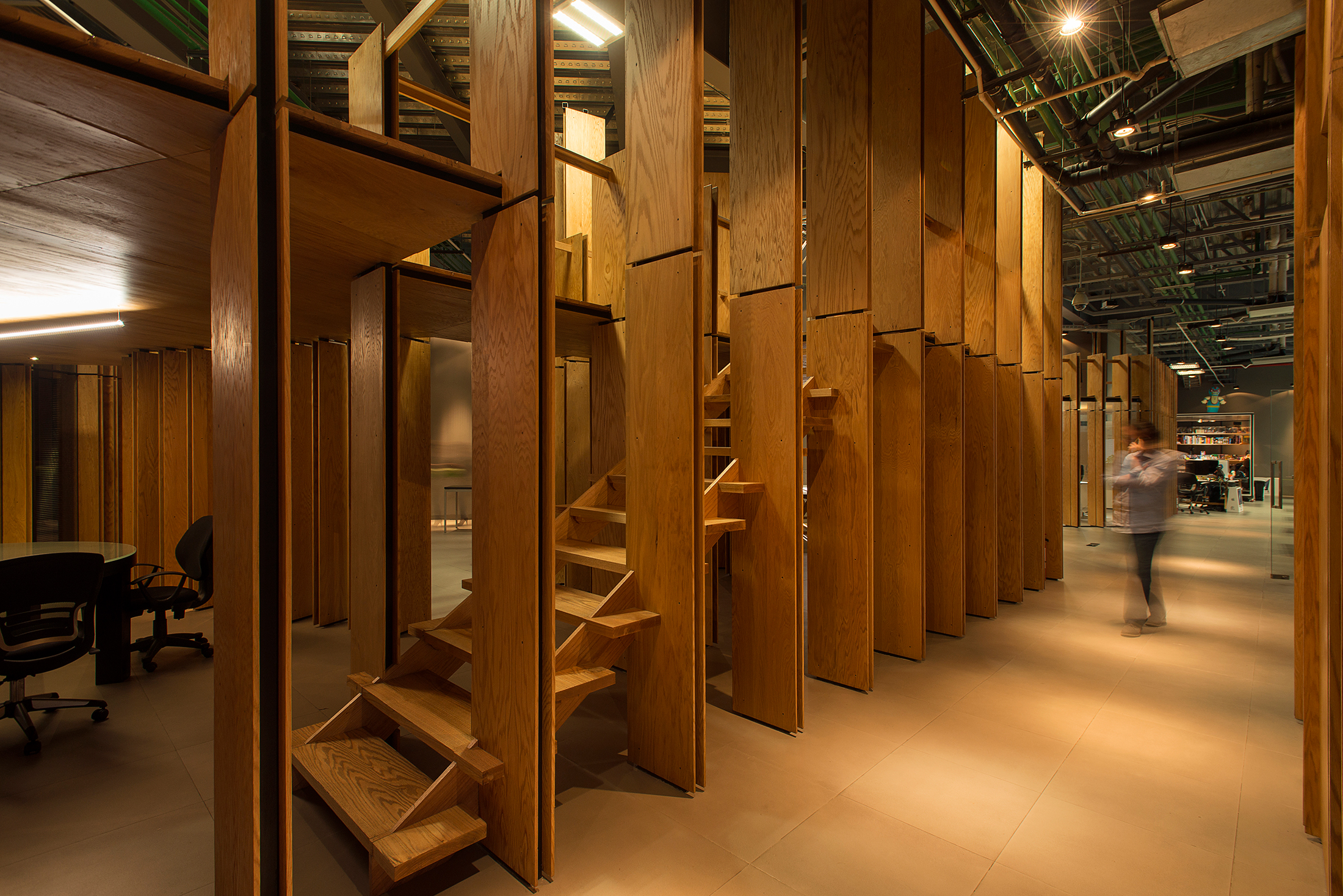 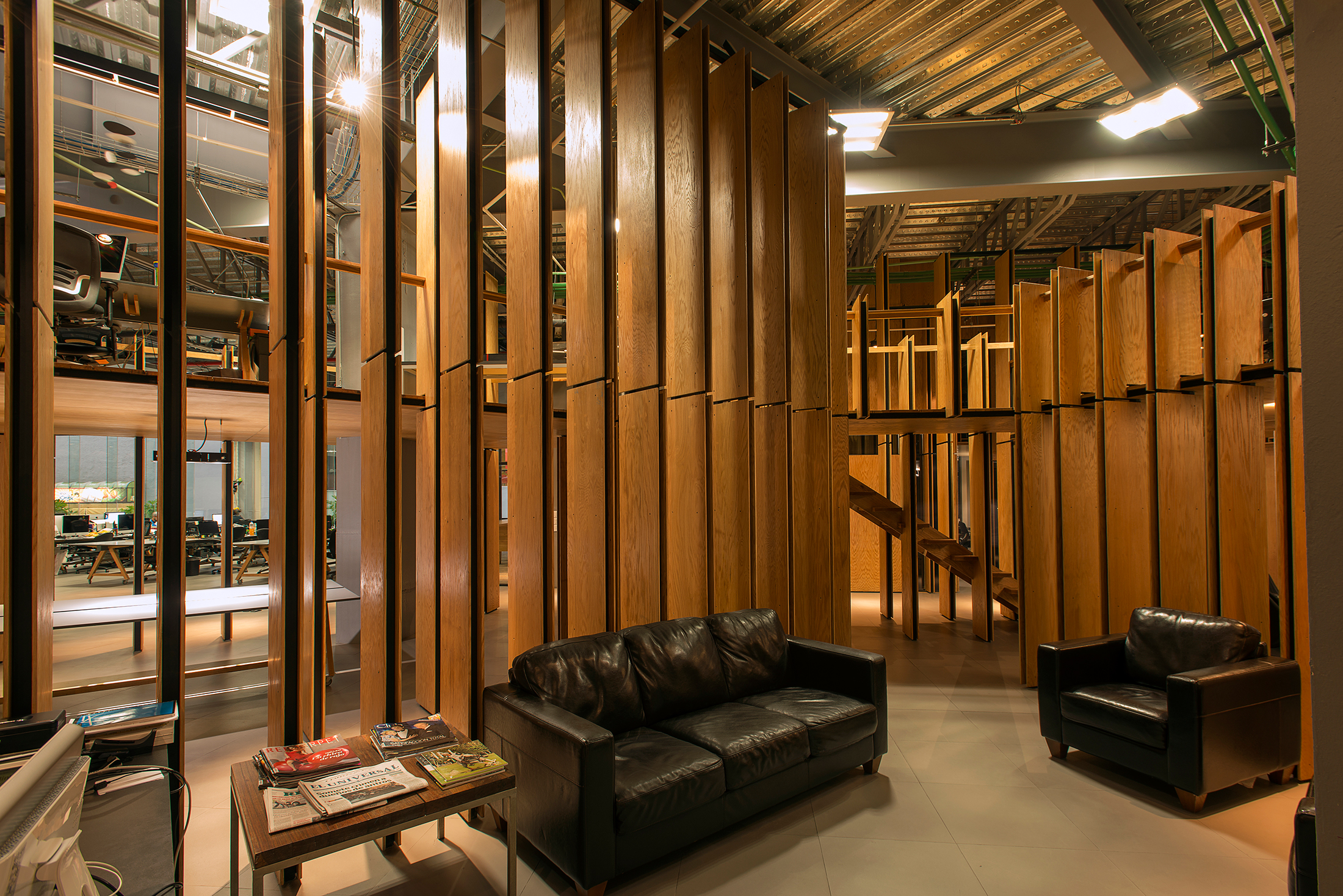 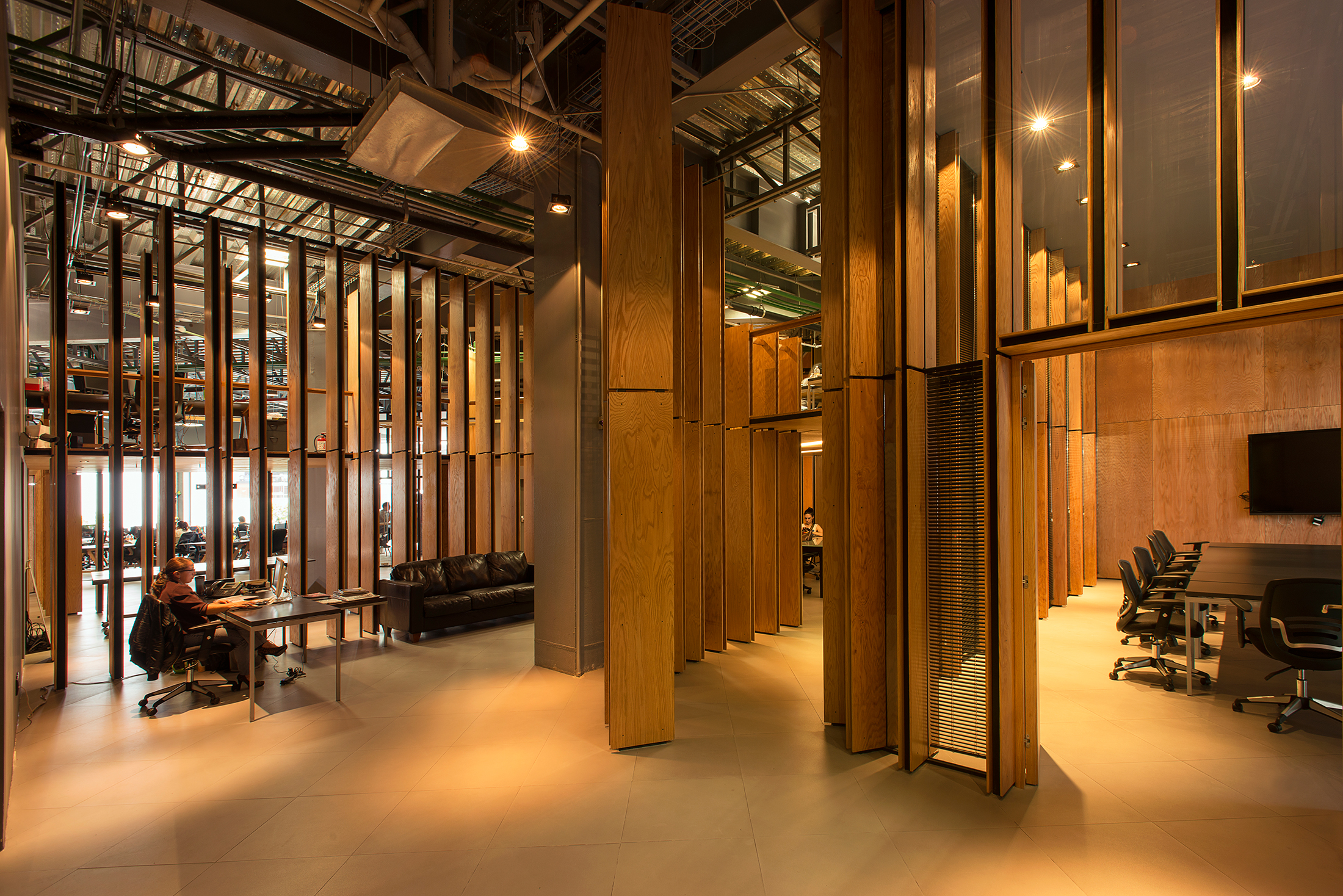 2013 / AMDI winner for the category in office construction

2013 / PRISMA winner for the category in office construction

Space is extensive. It has no limits until we mark it. It can be said that our marks are those of conquest. We give it a limit. We restrain it. Maybe at the far edge of the trade we aim at capturing space. Yet not all architects work with such invasive techniques. From time to time, we stumble upon other spatial sensitivities.

The interior intervention project titled Element Studios, carried out by MANADA, reveals alternative operations. Under the premise that the workspace is evolving, and that delimited spaces and fixed programs have become a limitation to collaboration and exchange of ideas, MANADA proposed activating an office as a flexible and permeable space in a strategy to string the space.

As in every fabric, the core intention was connecting unarticulated parts. Still, not every fabric is made under the same conditions. With great cunning and an increasingly recognizable operating strategy in their projects, MANADA developed a building system that allows for a cost- and time-effective response to the development that the client needed by handling the system pieces with a single assembly method, while letting them duly address the program’s and space’s specific conditions. As a result, MANADA literally alters the fabric that connects one program with another, a gesture becomes self-evident when studying the architectural floor plans and noticing the seams that is defined upon distance variables between elements. MANADA systematically gives raise to variable connection conditions, at times dense, at times permeable, at times comprehensive, but fluid every time. The space, as well as the program, flows. Passing from a silence area to a collaborative room is never categorical. Transitions both spatial and programmatic take place in degrees and degradations. This implies that a space and a program are not one thing and another at all times. MANADA produces intermediate spaces that are not either one thing or the other, neither A nor B, but a mix of them. Not A + B, but C. An Other space, a space full of potential: a space that the users themselves activate and define.

The structure, which MANADA strings through the different programs of offices, becomes a line that goes over the entire space. Yet it never encloses a place from another. The structures, once again, string together, weave, connect. Their thickness, their articulation and their distance between elements gives character to the connections. The users of the offices inhabit those connections. There resides the revolutionary power of MANADA’s architectural proposal: they make things happen where typically nothing happens. If other architectural practices try to scrub out the union between a program and another in order to blur differences, MANADA extends said union, makes it a space in itself, one whose program is caught up by the adjacent parts while still articulated enough to allow for its own program.